“If you observe all these things, I promise you everlasting life!”

What is the Franciscan Third Order?

If you have come to inquire into the vocation of a Franciscan Tertiary of the Immaculate, it is not by accident! It was Our Lady, the Immaculate Mediatrix, who gave this grace to you. “The Third Order was born in the mind of your Seraphic Father the day that a group of souls, moved and urged on by his words, asked to be allowed to accompany him on the path he was traveling, following in the footsteps of Christ, in whose name he was constantly repeating the words: “Be perfect” (Mt. 5,48)…the Third Order of St. Francis was born to satisfy this thirst for heroism among those who, though having to remain in the world, did not wish to be of the world. The Third Order, then, seeks souls who long for perfection in their own state.”— Venerable Pope Pius XII (Address of July 1, 1956)

Origin and History of the Franciscan Third Order

In or about 1209, St. Francis had many followers, some known as penitents. They did not become friars or sisters but they continued to live in their homes. St. Francis provided them, the first 3rd Order members a short and simple rule of life. In 1221 a legal rule was written by Cardinal Ugolino and approved by Pope Honorius III. The first Franciscan Pope, Nicholas IV, slightly revised the rule and formally approved by means of a Papal Bull in 1289. In 1883 the rule was again revised by Pope Leo XIII for modern times. The Holy See, in 1957, issued general constitutions that interpreted and explained the letter and the spirit of this rule. Notable people have followed this rule and embraced this life, Popes, Cardinals, Kings, and Queens. Holy Fathers Gregory IX, Blessed Gregory X, Innocent XII, Pius IX, St. Pius X, Popes Martin V, Clement XII, and Pope John XXIII were also 3rd Order members and all the Popes succeeding Pius IX to Pope John XXIII. Cardinals St. Charles Borromeo, Manning, Vaughan, Kings St. Louis IX of France, St. Ferdinand of Spain, and Queens St. Elizabeth of Portugal, and St. Elizabeth of Hungary were a few out of many tertiaries of nobility and stature. Other prominent people in the 3rd Order include Christopher Columbus, Dante, Michelangelo, and Raphael. There were also notable business men and workers in the 3rd Order. Blessed Peter of Sienna, a comb manufacturer, Blessed Luchesio, a merchant, and dock worker Matt Talbot. Third Order parents of St. Theresa the Little flower, and the mother of St. Marie Goretti will conclude this limited list.

The Distinctive Character of the Franciscan Tertiaries of the Immaculate 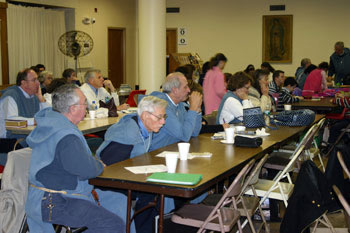 The Tertiaries: An Order of Penance in the World

A vocation to the Franciscan Tertiaries of the Immaculate is a divine call from God. Every call from God demands some sacrifice. When God gives someone the grace of a vocation, He always demands some sort of renunciation. This truth is brought out clearly in many events of sacred history. When God called Abraham, for example, He told him: “Leave your country, your kinsfolk, and you father’s house” (Gen. 12,1). Our Lord invited the Apostles to leave their nets and follow Him; and he would make them fishers of men (Mt. 4,19-20). St. Matthew the publican left everything, arose, and followed Jesus at his call (Mt. 9,9) 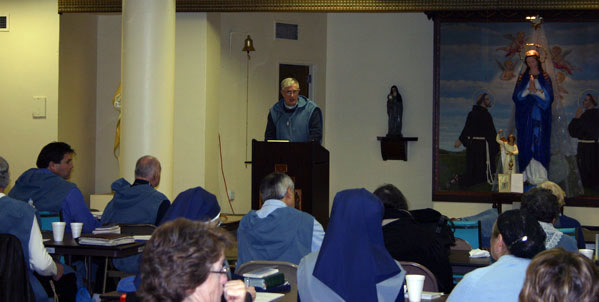 There is always an invitation to renounce something, and then a promise: “I will make a great nation of you”; “I will make you fishers of men”; “You will have a treasure in heaven…” It is not a question of a simple exchange, of bartering one thing for another. God requires a true renunciation of something of real value —one’s country, one’s parents, one’s business, one’s wealth – for a promise. And this promise is to be fulfilled completely only in the sometimes distant future. Do you need a special vocation to be a Franciscan Tertiary of the Immaculate? No. It is enough that you want to live a more perfect, more Christ-like life, a life totally consecrated to our Lady. This desire is already a great grace and a divine call. To answer this call, you will have to make certain sacrifices; some things are simply not compatible with a sincere desire for perfection, with being the “possession and property” of the Immaculate. If the Tertiary is not bound to practice actual poverty as religious do, still he must practice an interior and exterior detachment, which is the spirit of poverty, and very real. True, he takes no vow of obedience, but he certainly must have the spirit of obedience. He takes no vow of chastity, but he is certainly expected to live chastely in accord with his state in life. He does, however, take the vow of unlimited consecration to the Immaculate, as the Friars and Sisters do, which seals by solemn oath to God his unlimited belonging to our Lady as Her “possession and property” and his work as her “docile instrument” (Stat., Art. 5) And the promise? It is one each tertiary hears on his profession day: “If you observe all these things, I promise you everlasting life!”

How to Join the Franciscan Third Order of the Immaculate

There are presently four established communities of the Franciscan Tertiaries of the Immaculate in North America. The Proto-community is in Griswold, CT – its members travel from all over CT, RI, and even as far as New York for the monthly meetings. There is also an active community in New Bedford MA, where at the present moment consists of almost one hundred members including those who wish to join. There is also the community attached to our friary in Maine, New York as well as the newly established community in Bloomington, Indiana. Note that membership to the Third Order is only possible for inquirers who can attend monthly meeting to any of these existing communities. In the occasion that one is interested of their spirituality but can not attend the monthly meeting, he can still share in their spirituality by being an “associate” of the community.